Tuesdays Tunes and Some Rambling

I saw a meme on Facebook this morning that got me thinking about music. About how our kids are introduced to it and find their own styles and favorites. About what they listen to when they pick the tunes. About what music makes them happy, sad, hyper, or helps them relax. It just got me thinking....

Gamer Boy hangs out in his room listening to soundtrack songs from the Middle-Earth movies - The Hobbit's and the LOTR. He rocks out to Fall Out Boy and songs from Aladdin, enjoys Mumford and Sons, Johnny Cash, Macklemore, Imagine Dragons and The Beatles.

Angel Face's "cheer-me-up-jam" for the last couple years has been Fall Out Boy's 'My Songs Know What You Did In The Dark'. She and Princess Z belt out Top 40's, Selena Gomez, Hedley, Carly Rae Jepsen, Sara Bareilles, Marianas Trench and even Pink with their karaoke machine.

When they're feeling frisky (aka: hyper) living room dance parties may be to music from Disney movies, Selena Gomez, or (if they are really trying to get Heli Dad and I grooving too) dance music from around 1999 like Aqua, Blur, and others of that ilk (think along the lines of music from the first few releases of the 'Big Shiny Tunes' and 'Much Dance' compilation mixes). They know the words to some of the songs, not all but some and try to sing along with us.


Lenka - 'Everything at Once'
First heard on commercials and at the beginning of Disney DVD's, this song was one that quickly captured all 3 of my children's interest. Eventually we tracked down a full version of the song and now we all delight in singing along - trying to remember every word and rhyme.

Their music styles and preferences are as vast and eclectic as mine and Heli Dad's - because they are still pulling many of their favorites from our collections. But, and this is a big but, they are already finding their own too. They hear a song in a movie and ask to download it from iTunes. They'll hear remixes of songs on video games and search out the original. Their friends play music and they find something new they like. Their discovery of their musical tastes will continue to change and evolve and mature (or not) for the rest of their lives.  I'm sure that our parents wished for our favorite songs to be less annoying (granted I can't think of anything off the top of my head) just as we do sometimes with our own kids. But after really thinking about it this morning I find myself fascinated and looking forward to all the discovery stages of their musical tastes to come - no matter how head scratching, jaw dropping, irritating or wonderful they are!


Here's the meme that got this ball of yarn gathering in my head... 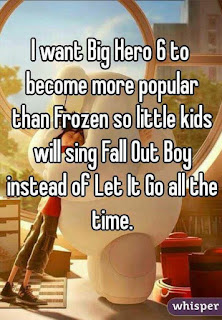 As a side note, my kids do know every single word to both
'Immortals' by Fall Out Boy from BIG HERO 6 and 'Let It Go' from FROZEN.
Posted by LD Ferris at 2:11 PM No comments: 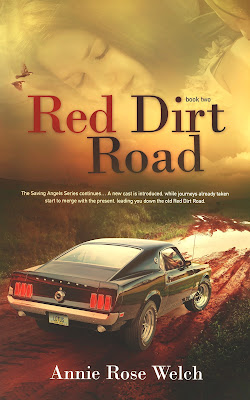 Death has always seemed just one step behind Layla Hill, taking almost everyone she’s ever loved. After she loses the love of her life, Layla vows to never love again—how could she, when she’s a death magnet?

Trying to outrun fate traveling with her uncle Willie and his band, Layla meets Michael Roberts, a beautiful Irish boxer as gentle on the piano as he is brutal in the ring. He proves as relentless in life, fighting for a place in her world even as she pushes him away, trying to protect him from her killer tendencies.

But neither foresees the sinister presence waiting for Layla at the end of the Red Dirt Road.

Find all the book information on the authors website or on the Goodreads page for the book.

You can purchase your own copies of Welch's
Red Dirt Road here:
Paperback or Kindle

And now, THE REVIEW:
Not too long ago I told you about the first book Annie Rose Welch's Saving Angels series, Marigny Street. It remains one book that even today, weeks later, lives still in my thoughts and heart. I truly believe it's simply one of those stories that stick with you. Not just because of what happened in the story, or to the characters; more, it is the emotion that it produced within me, and the varied paths my thoughts have taken because of it.

However, Marigny Street is merely the first book in a series of what I'm coming to expect as books that will continue to emotionally knock me to my knees. Red Dirt Road tells a different story then its predecessor but the love that shines between its main characters, Michael and Layla is every bit as brilliant as that which we read about between Gabriel and Eva. Though the struggles they face are different (while aspects may carry some similarities), and the emotional barriers Michael and Layla have to cross have different sources, Red Dirt Road touched in me in much the same way that the first book in the series did.

Layla has lost nearly everything she has ever loved and is, in quite a number of ways, hanging on by her fingernails - to life, to sanity and to some semblance of happiness. Her life has become something she never really intended for it to be but she has structured it that way to keep herself, and everyone around her, safe. But safety is sometimes a precept, like beauty, that can only be seen by the beholder. To others the safety Layla created for herself merely looked like a recipe for unending loneliness.

In his dreams Michael has been fighting to find, save and hold one thing all his life. Each night in his sleep he battles to seize the thing that will finally make him whole. But during his waking hours Michael has been fighting one battle after another as well - in the boxing ring, making a name and unquestionable reputation for himself. Yet he's not just a determined warrior, he's also a poet and a lover, a musician, and a man with an impeachable set of morals, quick wit and wicked humor. When he sees Layla, he knows she's the one thing he has been waiting, searching and fighting for for so long. And he knows that he'll spend the rest of his life fighting for her too.

Now to convince her that not only is she worthy of the fight, but that she's strong enough to battle beside him as well - secure in the knowledge that if she should falter, he will always be there for her, just as he trusts that she would always support him when or if he needed help.

It's hard to explain exactly what makes me love these characters, or the menagerie of supporting characters that surrounds them. There's no one thing that makes me love the story, nor any single specific aspect that has me (already) anticipating the next book in the series. Simply put, Welch has written a story in Red Dirt Road that makes you love it and leaves you aching for more. I so look forward to continuing the journey that the Saving Angels series is taking me on, and discovering how the threads of all the stories will intertwine. And just as I have enjoyed both the stories I have now read from the series, I truly believe you will enjoy them too.
Posted by LD Ferris at 10:54 AM 2 comments: