Welcome to all the Halloween Blog Hoppers!!
I can’t wait to check out all the blogs that are involved with this blog hop and meeting all the bloggers, writers, reviewers, etc., that are participating.  I hope that you’ll find something of interest here on Ups, Downs, Ins and Outs and that you’ll follow and keep coming back to see what I’ve got going on around here.  There are going to be some new happenings starting up in the next couple of weeks/months, including monthly contests and book giveaways.

Image via WikipediaHave a Happy Halloween and I’ll see you around the Hop!
~everyone who leaves a comment between October 27th and October 31 November 1st will be entered into a contest – the winner will be chosen at random and their blog will be featured here on this site… (Some lovely cross promotion for your blog and all you have to do is leave a comment that includes your blog’s URL!)
Hopping off –
Lacey
~this Halloween also known as Medusa~

“Forgive, forget.
That's a lesson
That we haven’t learned yet.”

There are lessons to be learned everywhere - in the supermarket, at the post office, at school and even standing on the sidewalk at the corner of a street.  Some of them you’re acutely aware of, others are completely subconscious.  I really like this song, because I think it’s sort of like one of those subconscious lessons… There’s a story to it, meaning, and without even realizing that you’re hearing it, you’re absorbing what it is that the song is trying to tell you.

And of course now you’re wondering right? What is the song trying to say?  And that’s the beauty of it.  It makes you think about the message that it’s portraying, but the most important message it tells you is something only you can know, and something you have to figure out.

After all, the thing you need to know most… well it’s that thing you “haven’t learned yet.”

So take a few minutes and listen to this great song... It's by Classified and it's aptly called "The Day Doesn't Die."

Review: A Hunger Like No Other by Kresley Cole 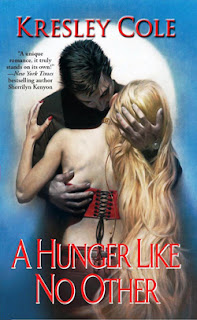 What happens when the Lykae King mates with a half-Valkyrie, half-Vampire beauty? Well… trouble ensues, chaos erupts, and yep – fangs are flashed!  In this first novel of the Immortals After Dark series, Kresley Cole introduces us to a world that exists beyond our imagining but nestled (for the most part) comfortably within our own.  Balanced on the brink of the Accession, all the factions of the Lore are gearing up for war but before the real battles begin, alliances will be made.

After being imprisoned and tortured for more than a century by the Vampire Horde, Lachlain MacRieve – king of the Lykae – escapes when he scents his mate somewhere close.  Maddened from the pain of his torture he is astonished and suitably horrified when he discovers that his mate is in fact a vampire.  Yet he can’t let her go because he realizes, even then, that she’s likely his only means of healing.

When Emmaline Troy left the safety of her coven and traveled to Paris with hopes of finding out who her father was and whether he is still alive, she never dreamed that she would be more-or-less abducted by a raging werewolf.  Even more unlikely, she never would have expected to be so drawn to him, or so attracted to him… at least during his moments of sanity.  Having always been known as Emma the Co-ed and Emma the Coward, Lachlain’s brief windows of madness terrify her.  Until she realizes that even in the deepest depths of his darkness he wouldn’t hurt her, she constantly wonders when he’s going to strike and whether she’ll be able to survive his attack.

Then what has always been forbidden comes to her and she discovers within herself a strength and power that she never believed that she could possess.  Lachlain watches as the seemingly timid vampire becomes the powerful Halfling that is his true mate.  As they become closer, the question of who her father was becomes more and less important to them both and they all – Emma, Lachlain, and her Valkyrie aunts – wonder just who the vampires seem to be searching for; for the Valkyrie have always kept her existence a secret from the vampires, and yet those creatures continue to search for some mysterious “her.”

Is it Emma that they look for? And who exactly is looking – Demestriu (the crazy King of the Horde), Ivo (the vampire who seeks to take his place), the Forebearers (an opposing faction of vampires made of turned humans that don’t drink blood directly from the flesh), or some other faction that they don’t even know of…

The Accession a period of time that occurs roughly every 500 years, where Lore-beings stand against Lore-beings in war… a ‘built-in’ population control.  (from the Book of Lore glossary in this novel) “And a time shall pass that all immortal beings in the Lore, from the strongest Valkyrie, vampire, and Lykae factions, to the phantoms, shifters, fairies, sirens… must fight and destroy each other.”

And if you're interested... Check out this fan-made video, featuring the main characters of the first 9-10 stories of the Immortal After Dark series.

You’ve wondered about the bands name (Gym Class Hereos? Really?), heard the catchy tune, and caught yourself singing along to the lyrics… Stereo Hearts is just one of those songs that when you hear it makes smile and, if you let it, will stick with you throughout your day.  With Adam Levine (of Maroon 5, The Voice and just all around awesome music) this particular song is yet another one that has come to remain almost permanently on my personal playlists.  And if it also happens to be one of the songs that gets cranked up and used for some iCarly like ‘random dancing’ around the house with the kids…. Well that should prove just how cool everyone in my house thinks Stereo Hearts is!

It’s sort of strange but one part of this song (see below) totally makes me think of American Pie by Don Mclean.  I’ve always believed that music, like any art form, is about emotion.  Not just telling what emotion the artist feels when they sing it, or what the songwriter felt when they wrote it, but what the song can make you feel, think about and become part of.  This song, Stereo Hearts, it’s cute buts it strong too because I think without you even realizing it, the song makes you consider who you’d play it for, who would change your mind…

“I only pray you'll never leave me behind (never leave me)
Because good music can be so hard to find (so hard to find)
I take your hand and hold it closer to mine
Thought love was dead, but now you're changing my mind”
Posted by LD Ferris at 8:00 AM No comments:

This October, seeing as how it’s the month of ghouls, goblins, witches, vampires and all things scary and out of the ordinary, I decided that I’d focus my reading on stories of fantasy, sci-fi and, of course, the paranormal.  And so the first half of October saw me reading some old favorites – catching up with old friends – and finding some truly wonderful new material.  So take a look at my list and tell me what you think!

The Three Worlds novels by Jacquelyn Frank (both titles listed above) are amazing stories.  Like her Nightwalkers, Shadowdwellers, and Gatherers series, these stories feature strong alpha-type hero’s and women with the power, beauty and confidence to perfectly match them.  Her stories are always worth the cost, time and effort to read and for those of you who decide to pick up one of her books, no matter what the title or series that it comes from, you will not be disappointed.

It’s a very rare day that I pick up a Sherrilyn Kenyon novel and not like the story.  The League series, of which all the aforementioned SK titles belong to, is one that I particularly enjoy because it’s completely different from the other stories that she’s written, (at least so far as I’ve read thus far!) and yet they still manages to capture a reader’s attention and interest almost immediately.  Unlike her Dark-Hunters, Dream-Hunters, Chronicles of Nick, Brotherhood of the Sword, and Lords of Avalon series, The League is completely fantasy based with no ‘Earth’ link, which is something that I don’t often find in the genre’s that I read but that I always seem to like just for the awesome alternatives that it offers.  The next book in this series is Born of Silence, featuring ‘Darling Cruel’ the beloved and quirky character that we’ve seen in almost every other League story, and is slated to come out in April 2012.

The other two books listed – by Gena Showalter and Jill Monroe – are the first two books in the Royal House of Shadows series being published by Harlequin this fall.  Books three and four, by Jessica Andersen and Nalini Singh respectively, will be available in November (#3) and December (#4) and like the first two are highly anticipated by readers, fans and critics alike.  Based on the first two books I would say that the series, when complete, is going to be a very cool accomplishment and set of works by some of paranormal romances best authors.  (A full review of these books and the series will come in December, once all the books have been released… and read by Moi!)

Check out this video trailer for the entire series – originally from the Paranormal Romance Blog’s source page for this series… I promise, it is awesome as it looks!