FAOM: One Last Thing for January

It has been a fantastic month here on Ups, Downs, Ins & Outs with Kelly Lyman - the January Featured Author of the Month (FAOM). It has honestly been a blast getting to know her through both parts of her interview, her book (because yes, I do feel you can get to know authors to a certain degree through their writings), her guest post, and by following her on social media. As it inevitably does, time marches on and the days remaining in January are down to just one more, which means our time with Kelly as our main squeeze is very nearly up.

But there is one last thing that we really, truly, must do before the page on the calendar turns. After all, two special someone’s are patiently waiting to find out whether they’re the luck ones who will be receiving a free copy of Lyman’s The Petticoat Letters from the FAOM Giveaway that has been running all month. 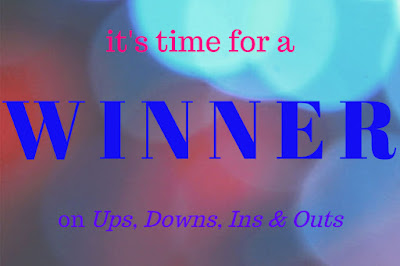 Before I do announce who those winners are I want to thank everyone who entered. The Petticoat Letters is a wonderfully rich tale that I was happily surprised by - I love historical romance and have rather high expectations for the genre. In fact I very rarely rate a book (on Goodreads, Amazon or other vendors) with anything over 4-stars, but I was more than happy to give The Petticoat Letters a coveted 5-star rating and review after I finished reading it! Its been about a week since I completed my reading and I still find myself occasionally lost in thought over various things that happened in the story, or daydreaming about what may be coming next for the main characters: Nora Bishop and Alex Foster.

It really was that good.

I suppose I should tell you all who will be getting those free copies now, right?

Okay, okay. It is truly my honour to announce the winners of the January FAOM Giveaway are:
Cassandra D. and Amanda F.

I wish them the warmest of congratulations and a very happy reading! 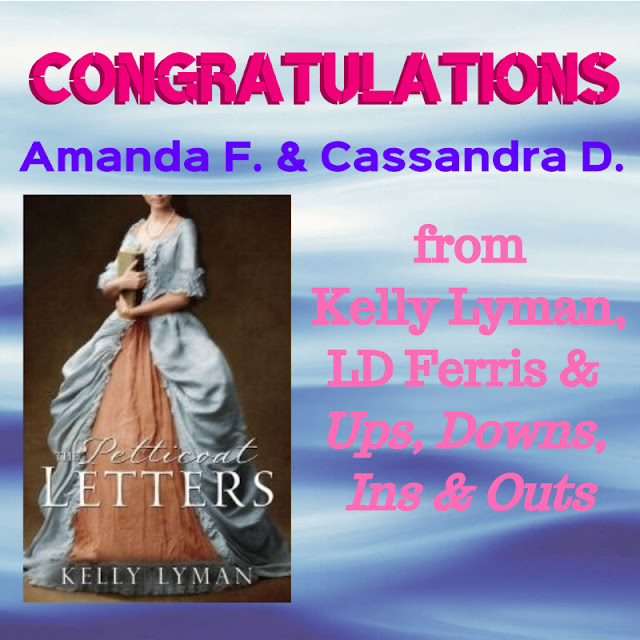 Didn’t win a free copy? That’s okay - you can get a copy of The Petticoat Letters by Kelly Lyman today for less then $5.

Until next time friends, happy reading to you!!
Posted by LD Ferris at 3:35 PM No comments:

FAOM: A Few Words From the Author (the Sorta-Interview-Part-3)

A little earlier today I shared my review of The Petticoat Letters with you all here on the blog. If you missed it you can find it here. In that, I talked a lot about the main character Nora Bishop, about my perception of her personality, her situation and the story. I only briefly mentioned her male counterpart Alexander Foster.

I adore both of these characters.

Nora is a woman worthy of admiration in any time period, during the late 1700’s in colonial America – she’s exceptional.

And Alex? Every time he’s on the page I find something more to like about him. 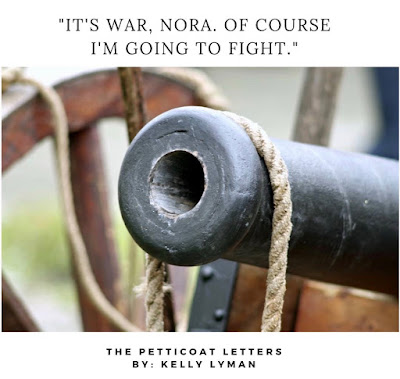 “Battle, Nora. We are about to engage in battle. Hurry up!”

“What are you going to do?” I said, standing up. My heart raced as fast as some of the horses I spied.

“I’m going to head south with the rest of the Rangers and three other companies of the Virginia Continentals. We’re going to flank the British on the right.”

“I don’t give a damn about battle tactics! You mean you’re going to fight.” Hysteria rose in my voice, and I wrung my hands in front of me. Perspiration dotted my forehead. The only person I felt safe with in the camp was leaving me. What happened if he died? What would I do? How would I get home?

He’s courageous, strong, stubborn, intelligent, and has a sense of humour that comes out occasionally in bursts of dry wit and salacious quips. He’s honestly a good man doing what he thinks is right and I couldn’t help but truly like him.

“Petticoat letters? I like it. You know, it isn’t everyday a woman has something she wants to give me that’s up her skirts,” Alex said, grinning wide again.
-       The Petticoat Letters, excerpt from chapter 17

Fairly often when I’m reading, especially if I know I’m going to do a write up about the story, I’ll jot down notes to myself while I read. Sometimes I find I have a lot to say about the “bad guy” in books. Not so for The Petticoat Letters. One line pretty much sums up my feelings on him this time.

Have I adequately illustrated how much I love this book? Yes? No? Here’s one last thing then, because it so rarely happens.

So please don't miss your chance to win an e-copy of the book in our January FAOM Giveaway - enter here.

Or you can purchase a copy of The Petticoat Letters here.
Posted by LD Ferris at 2:44 PM No comments: