What I've Been Doing 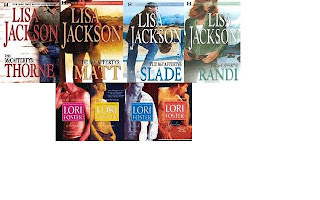 I spent most of this last week alternating between reading some new (and old) books and working on my own writing. I found some re-released books by some of my favorite authors and thoroughly enjoyed reading them.

I found Lori Fosters' Buckhorn Brother's series entirely by accident when I was looking a movie for my husband. It was just my luck that the store I was in had one copy of each of the four books in the series. I'd never seen the stories before (they were re-released just this month) and from what I understand, after doing a bit of further research and from Lori's note to readers at the beginning of the books, a fifth and related title is going to be re-released later this year (Casey).

After spending more than a month strictly reading only paranormal romance novels it was nice to read an easy-going contemporary romance. Not that the Buckhorn Brother's are easy-going men because although they may appear to be they are anything but, but the stories were so well written that I just breezed through them. I really like all of the men (Sawyer, Morgan, Gabe and Jordan - and the books are shown in that order) and I am happy that they have added to my library.

The other series that I found this week, and again this is one that I truly enjoyed, was the MacCafferty's series by Lisa Jackson. This series kept me interested through each of the books, and kept me wondering what the next twist would be and if the mystery involved throughout the four books would ever be solved. I loved watching the MacCafferty boys realize the mistakes they'd made when they were younger (and dumber) and do everything that they could to make both themselves and their respective ladies blissfully happy. And when it came to Randi... I'm glad that the truth came out, the mystery solved and I was especially happy that Striker got the girl. The whole series just makes me smile and sigh.

When I didn't have myself wrapped up in the books of these series I fell back on one of my favorites - today that leaves me with Night Play by Sherrilyn Kenyon.

As for working on my own writing? Well I finally seemed to have recovered from a spell of writer's block and have spent most of the last two days frantically typing. Ideas started flowing into my head in a downpour late friday night and they haven't stopped yet. Hopefully, I'll be able to get a substantial amount of work done in the next couple weeks... If I do, well, let's just say I'll be a happy, happy woman!
Posted by LD Ferris at 12:55 PM

It's always nice to switch up te pace, isn't it?? Thanks for stopping by my blog!!!