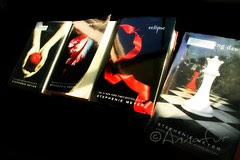 It took me a while to get on the Twilight bandwagon. When the first couple books came out, I actually avoided the series. I can't really recall any specific reason, though I think a big part of it was that I'd just gotten over the whole Harry Potter craze and I didn't have any interest in jumping in to another YA book series. No matter what I heard about it. No matter how good the reviews.

Eventually I started to hear whispers about a movie coming out though. I think by this point in time Christopher Paolini's Inheritance Trilogy - Eragon, Eldest, Brisingr had caught my attention and I'd enjoyed (eventually) all of them immensely. I'd seen the movie (for Eragon) too, but that was a disappointment to me. It was good, just not as good as it should have been. So I was intrigued. The Twilight series, this saga had been getting such amazing reviews and they were making a movie of it and I couldn't help but wonder if the directors and producers and actors would do a better job of Twilight then was done of Eragon. The movie came out and was in theaters before I thought more seriously about reading the books. Still though I procrastinated.

Then the fourth book was out and the movie was being released on DVD. And I decided that maybe it was time. I didn't want to commit myself to all four books though, not yet, so I went out and bought only the first novel. I read the first few chapters right away and I was impressed. I don't know what exactly it was about those first pages of Twilight that caught my attention. Then held it. The next morning though, I picked up the book again and started reading.

I didn't stop reading until I was finished the book.

I'm sure I was a pain in the ass to my family - my kids and husband - that day and the several days that followed because I was absorbed. Bella pulled me into her despair of having to move to Forks, her utter horror in having to give up the heat and sun of Phoenix, and her dissatisfaction with life in general, right from the first word. She and Edward tied me up in anticipation of what would happen next, of what could happen next. And I was awed by their understanding and devotion to each other.

Over the course of the next 4 or 5 days, I was back to the bookstore to get the other three books and then I sent the kids to my mothers and I read.

My heart broke right alongside Bella's when Edward left in New Moon. I was so thankful for Jacob when he reached down and helped drag her out of her pain, and I saw doom as I watched Jacob fall further and further in love with Bella. And then there was Bella, herself. Poor, sweet Bella who needed Edward so badly and needed Jacob so badly, and somehow found herself loving both but unable to truly have either. Her continued devotion to Edward, the 'bloodsucker', caused issues with Jacob and the other werewolves. Her loyalty drove a wedge between them, even as her knowledge of the werewolves and Jake's truth pulled them together. Then suddenly one small, seemingly insignificant choice changed everything, again.

The trip to Italy to save Edward had my heart racing with fear. If she was too late, he died and then Bella would fall even further down in to the abyss that she'd barely survived the first time. And then there he was in all his glorious, tortured pain and everything was headed towards okay again. We got another glimpse of course at how twisted "true" vampires could be when we were introduced to the Volturi - we'd been told of them, briefly in Twilight but I don't think any of us truly understood how different they were, not even after the experience with James. But Bella and Edward came back to Forks together and life returned to "normal."

As time passed during Eclipse I was torn. Jacob was such a nice guy and he loved Bella so much. It didn't seem fair that despite everything he'd done for her, everything Edward had done to her, that Bella would continue to treat Jacob with the same level of need that she did once Edward was back. Granted, Jake allowed her to use him and depend on him more then he should have, but I didn't like that he then turned that around and used it against her. I truly think that he did that, he used her friendship against her, to try and make her depend on him even more and then he was hurt that she still chose Edward over him. Edward, who even though he'd hurt Bella, had only done it in an effort to protect her from his nature, who loved her unconditionally. Edward who gave her the freedom to chose what she wanted and what would make her happiest, instead of trying to force her to choose him.

Was this simply the difference between a century old vampire and a teenage werewolf? I don't actually think it was a condition of age. Looking back after having finished the series, after seeing the way things work out for Edward and Bella, for Jacob and Renesmee and for all the others too... I think the boys different reactions to their love and need for Bella was simply a demonstration of the difference between infatuation and real, true love. I'm not belittling Jacob's feeling for Bella during New Moon and Eclipse. I'm not belittling his feelings for her during the first half of Breaking Dawn either. To his mind, at the time, she was everything important to his life but in his fervor to hold her to him, he hurt her even more.

Of course, there were a lot of things - big and small - that happened during the second and third books that could have drastically affected the outcome. The Volturi threat, Victoria, even just the vampire diet in general all worked together with the emotions of the characters to lead the story to Breaking Dawn.

Edward and Bella cemented their human relationship and get married. Then through a twist of fate that no one expected (least of all me) we end up with Renesmee. Bella is changed, "transformed," and we all are forced to question what makes her special, different - it's my theory that she was never a typical newborn vamp because she actually chose to become a vampire. I think it's pretty universal that all the others became vampires after being attacked by one or because they were dying and becoming vampire was the only way they could continue to 'live'. They didn't know what was going to happen, they weren't told what to expect. Bella was and so she was prepared to deal with whatever her choice threw at her.

So after plenty of procrastination and, finally, falling victim to curiosity and peer pressure, I love the series. I read through it once, then gave myself some time to think about it and absorb the story, and then I read it again. I paid attention to the way Stephanie Meyer used language and situation to tell the story. I noted the depth of her explainations and the wealth of information and color that she builds into her 'world.' The Twilight Saga truly is a remarkable piece of fiction which, like Rowlings' Harry Potter, I think will live on in the hearts of it's readers forever. Like fairytales and old fables, Twilight (and Meyer) teaches us a great many things.

Of love and loyalty.

Bonds of blood, of heart and mind.

Of everything that is important in the world.

And like the lessons of those old stories what we've learned from Bella and Edward, and all the others who make this series what it is, will stay with us always and continue to guides us in our lives.