When I saw that it was time to put up another review I debated with myself about what I wanted to post.  I couldn’t decide whether I wanted to do a review of one of the Breeds’ books by Lora Leigh that I talked about in my reading list post, or if I’d work on something else.  When I realized that the newest Breed novel would be coming out next week I decided to wait on that and talk about the Breeds later (probably next month).   (Please see the note below - updated September 27, 2011!)

So I was again stuck about what to post now.

I looked back through the reviews I have on file, that for whatever reason I never got around to posting, and found Wicked All Day.  I’ve always been a fan of Liz Carlyle and her historical romances, and while all of them are wonderful stories with rich characters and plot lines that grab your attention, Zoe was always a character that I felt deserved her own story.  And then Liz did us all a glorious favor and gave it to us.  I read this book a long while ago, back when it first came out actually.  It’s been sitting on my shelf of books that I want to read again, along with other Carlyle books, Julia London novels, and several others… Rereading my review, simple as it is, made me remember why I fell in love with Liz Carlyle’s writing and why I really want to go back and read this story. 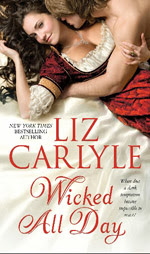 With dashes of characters we’ve long known and loved, Carlyle has added dimension and fullness to Miss Zoe Armstrong and given us a story that can easily be held to our hearts.  As a young lady, Zoe stole our affection when we were first introduced to her in her father’s story.  Since then we’ve seen her vivacious spirit and her kind, loyal soul.  But it wasn’t until this story was underway that we finally, and truly, got a glimpse of her heart.

While we’ve had encounters, or heard second-hand about Robin, Lord Robert Rowland in the past his brother has been an unknown, a mystery.  Stuart Rowland, Lord Mercer is a man that we quickly learn is used to controlling his environs and the people in them.  When he ends his affair with his mistress, he assumes and expects that to be the end of the issue.  But Claire, Vicomtesse de Cheraute does not wish to be so blithely pushed aside, and she’s just vindictive enough a woman to do anything to get her way.

In many ways the story begins with desperation – Zoe with her situation, Robin and Mercer, both, with their reactions to Zoe, and in Mercer’s case, with Claire – and as is often the case, desperation leads to chaos.  One misstep and an entire house of cards comes tumbling down.  Yet through fires of their own making, each of our main characters comes out better off then they began; for each of them has been shaped by their experiences and tempered like “Sheffield steel,” to use a metaphor often mentioned in the book.

Zoe has lived under a cloud of scandal her entire life but because of it she has a tender heart and a vulnerability that she tries not to let anyone see.  Mercer gained his title at a very young age and so came to the understanding that he had the power and money to get anything he’d ever want very early in life.  Their friends and family supported their beliefs (because for the most part they were actually right) and so the strength of the beliefs of themselves and their own worth only continues to grow.

It turns out, through many painful, random twists of fate, that the key to their own happiness can only be found in the other.  Fortunately they are able to fumble their way to happiness in the end, and the prospects for Robin and his Mrs. Wilfred are good too.

Argh! So I was just doing some looking around, checking to see if my local bookstore had the new releases that I wanted to pick up this week... Turns out I'm a moron who can't read, and Lora Leigh's new Breed novel, Lawe's Justice doesn't come out till November 26, 2011, NOT September 26 like I thought... So I'm craptastic and that was my flub.
Posted by LD Ferris at 11:07 AM