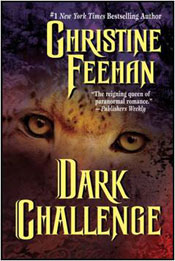 Julian Savage has always been a loner.  He has always pushed the bounds of acceptable behavior, for humans and Carpathian’s alike.  He has always looked up to the most powerful of their people – Mikhail, Gregori, Gabriel, Lucien, and several other Ancients from his youth.  It was this envy, this hero worship of males with great power that cost him a good part of his life, his youth, his every dream and hope for a future.  Blood-bonded to a vampire, in his youth he is forced to do many horrible things – including setting traps that nearly kill his twin brother (Aidan – Dark Gold).  Knowing that he could be used to spy on the Prince or the other Hunters, Julian withdraws from Carpathian society.  Over the centuries he has occasional, random meeting with others of his kind, but for the most part he spends the endless years wandering the Earth hunting the undead, studying, and doing other various tasks (i.e. guarding Savannah during her years doing magic shows – Dark Magic).  When Gregori asks him to warn a woman who is on the “societies” hit list, Julian accepts the task with the knowledge that after he has given the warning, he will seek the dawn.

And then he enters a crowded bar and hears music of pure golden and silver notes and his entire world is changed.  In those first hours (and the previous days) he assumes Desari is human, despite her magical voice, the band’s (the Dark Troubadors) pet leopards and her strangely alert bodyguard.  To save her, he gives her his blood before even sharing his name, and acting on instinct alone ties her to him with the ritual binding words.

But Desari, and all the other members of the Dark Troubadors, are in fact Carpathians.  They had escaped Europe during the Turk wars after all of their parents were killed; six children ranging in age from 6 months (Desari) to 6 years (Darius), and they made it to Africa before they settled down and struggled to survive.  For hundreds of years Darius has led them, guided them, and protected them, but in all the years that they have travelled and entertained people, they have never encountered any other Carpathians.  Due to their youth when they escaped Europe and their lack of contact with their own people, the Troubadors know close to nothing of traditional Carpathian life – the hierarchy, common mental pathways, lifemates and why males become vampires.  They have always existed as though they were the only ones of their kind that survived.   It causes some friction between Desari and Julian (neither knowing what the other expects initially) and between Julian and the men of the Troubadors.  It’s actually an intriguing perspective because we’ve never had a female lead with family protectors, and so we’ve never had the chance to see the ‘in-law’ dynamics of Carpathian courtship.  A lot of the time it’s actually quite amusing.

One thing that has stood out in this book, each time that I’ve read it, is the description Julian gives Desari of the life of an (unmated) Carpathian male.

“You are the only reason I am still living… I was empty without you.  And that kind of emptiness eats away at you, consumes you until your soul is dark and ugly and all that matters is sating your hunger.  But nothing fills the void.  Nothing.  Year after year you endure the emptiness until life itself is a curse hardly to be borne.  And all the while the darkness, the beast in you whispers, an insidious whisper, promising power from the kill, promises that wear away your belief in God, in all the things that are right and ture and good.  The monster inside you, so black and hungry for life, grows and grows until it has consumed everything you ever were.  That is the curse borne by Carpathian males…”

I think this passage is an amazing insight into Feehan’s unmated male Carpathians, into what makes them who they are, what they are and why some of them choose to give up their souls and become vampire.  In all the previous books, in all the books, we get varied and good explanations of what lifemates are and what they are to each other.  It’s refreshing to get a different view of it all.  And Julian’s words?  Well, they drive the point home and they make you feel them.  (Don’t they?)

Dark Challenge is just one more example of Christine Feehan’s brilliance, of her way with words and her genius of the paranormal.  Stay tuned for the next review in this series when we talk more about the Dark Troubadors.