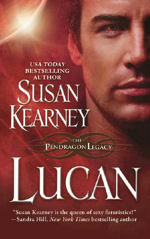 I had never read any of Susan Kearney’s work before picking up this book, something I did because of the link to Arthurian myths, and I have to admit that I was pleasantly surprised.  Obviously I’m a fan of nearly all paranormal romance that I come across but not all of the books I read are as entertaining as I found Lucan to be.  There have been several authors who have attempted to use the tales of Arthur and the Knights of the Round Table as premise for a fictional plot.  Many of them are good, interesting, entertaining stories and Lucan and the Pendragon Legacy are fine examples of the (sub)genre.
With a futuristic timeline, space travel, mythical creatures, and various technologically advanced races (of human or humanoid-types) this story truly is an interesting and thought provoking twist of a classic.

Lady Cael is a strong lead female character, though in the beginning of the story her confidence seemed a bit shaky.  At the heart of her is a very lonely woman; one who was raised to believe that she could never truly be happy.  She loves her family and her people but because of who and what she is, no matter how they may care for her, they are all terrified of her.  In many ways, I think, she’s terrified of herself as well and of what she could do if she’s not constantly on her guard.
Then in a quirk of fate, she gets herself stuck in a vent and the only person around to help is the only person who doesn’t fully realize that he “shouldn’t”.  Hailing from Earth, and a people who are slowly dying as a species, Lucan doesn’t understand the societal rules that hold Cael separate from the rest of the Pendragon population.  In the time that he has known her, he has avoided her for the simple fact that he is attracted to her, but doesn’t want either of them to be hurt when he must inevitably return to his home.  Rescuing her from an airshaft certainly wasn’t in his plans.  Befriending her though, made all the difference.
It was only because he got close to her that he truly saw her necklace for what it was and the symbols on it which he was able to decipher to bring down the shield of Avalon.  Being attacked and accused of heinous crimes forces them to be alone together, allows them to become intimate and leads them to fall in love with one another.
But can these two people, from two planets, light-years apart, find a way to be happy? Can a dragon-shaper and a human man be together as a couple?  The answers are in the book.  The means to reaching happiness and being able to be together are not, however, what you would expect.  Lucan and Cael’s path holds many things – pain, compromise, change, heartbreak, betrayal, love, loss and faith.
Like their lives together, this book is only the beginning of the journey for us.  Our next stop along the way comes in Rion (the second book of the trilogy) where we learn more about the dragon-shaper male who helped Lucan and Cael find their own happiness.  On Earth, Rion must find a life and a living, and he must continue to help his friends to accede the Pendragon Legacy, while also fulfilling his own destiny.
Posted by LD Ferris at 10:56 AM