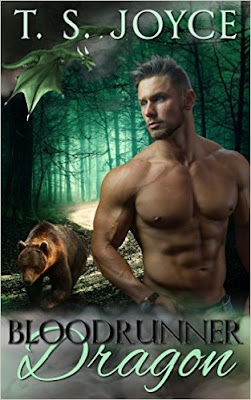 Harper Keller is a shifter on borrowed time. After failing to find her treasure, her inner dragon is desperate to find anything to connect with. When a plea for help comes through from an old flame, she puts her life on hold to track him down. But when she finds Wyatt, it's obvious time has changed him. He isn't the sweet and steady boy she grew up with anymore, but is now a dominant, rip-roaring grizzly shifter with alpha bloodlines and a mountain of secrets. He's dug himself into a deep hole, and is surrounded by danger from all sides, and now Harper has a big decision to make. Save herself, or spend her final days saving the man who is laying claim to her heart.

Wyatt James is on a mission to save the girl he left behind. He isn't the man everyone thought he would be, and has been hiding from the people he cares about, including Harper. If she sees him now, she won't recognize the monster he's become, but if Wyatt wants a shot at saving her, he has to make his move. Drawing an ailing Bloodrunner Dragon in close will attract the predators though, so he has to be ready for anything. And as the danger that shadows his life grows thicker, he will have to risk everything he's built to protect the dragon he loves.

I’m simply a sucker for a good, sexy shifter story.
Get your own copy of BLOODRUNNER DRAGON today and see if these shifters are hot enough for you!
Posted by LD Ferris at 4:31 PM