October Round Up: Whatcha Been Reading?

It is the end of October and between one thing or another it has been a crazy busy month for me. On top of the regular constant running for the Corner Table Kids, my younger sister got married (necessitating an extra-long weekend trip away) and my dad had a work accident and spent most of a week in the ICU. Needless to say reading hasn’t been the #1 priority this month. However, I’m really quite good at fitting in a chapter here, a few pages there, or whatever, so I figured I’d let you know at least a bit about the books I’ve read this month!

Through September I was reading the Dragon Kin series from G.A. Aiken and since I had discovered I’d nearly missed one of its new releases I figured I’d better check on release dates for my other favorite authors/series. And THAT is basically how my October reading list was compiled! So, highlights… 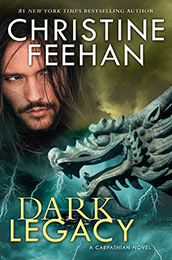 Dark Legacy, book 31 in the Dark series from Christine Feehan released September 5th. I had to re-read the previous title (Dark Carousel) to basically re-grasp the thread of the storyline that this book would follow – the Carpathian stories of the Dark series are sort of, but not really stand-alone novels in my mind. I mean you can read any one of them by itself, at any time. It would be a good story, you’d very likely enjoy it, but without the rest [of the series] you may not understand everything that’s going on. With a series as long standing and as richly diverse as the Dark series is, honestly there is just so much history that’s drawn upon that not having the series backstory can make it more difficult to follow. However, I’ve found that in many ways the Dark series has some natural groupings to the books that may make understanding it a bit easier – by which I mean, for example, you wouldn’t necessarily have to read books 1-10 to understand book 15, you may just need to read book 13 & 14. (Those book numbers are just examples, not actual recommendations.)

The Carpathian stories of the Dark series are some of my favorite to read. You have these men who are of varying degrees of ancient, and everything that implies, and women who are quite simply modern. The women have grown up in a world of relative gender equality and come to love these ancient, in some ways barbaric men. They love them completely and they’re loved completely in return. On the romance side of things every book is a joy as you get to watch these two vastly different people figure out how to relate to one another, while at the same time they’re falling head over heels in love with one another. Dark Legacy is a perfect example, as we watch one of the most ancient Carpathians (to date) fall in love with a woman who is quintessentially modern with her expectations. I really liked it. 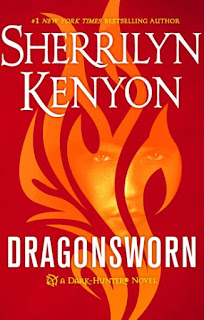 Sherrilyn Kenyon writes a couple of my other absolute favorite series. From another long-standing series, Dragonsworn is the 28th book in the Dark-Hunters series and came out in early August. This book is part of a story arc that began with Son of No One (Dark-Hunters, #25) so I had a bit more to re-read before diving in to it. Throughout the series there’ve been random comments about “the dragon in the attic” at Sanctuary (the New Orleans bar that is a regular feature in the stories). I’m not sure when I realized that there actually was a dragon in the attic but this arc takes that, and a whole lot more, and runs with it. Dragonsworn pulls together a few threads of storyline that have been building for quite a while and we’re finally beginning to see how they’re all entwined. At least that’s what seems like to me.

Unlike Feehan’s Dark series, in the Dark-Hunters it’s not just the written history that’s immense, and it is, but world mythology is drawn on heavily as well – which makes for unlimited possibilities when mixed in to fiction. That fact right there, that’s one of the reasons I read every single Dark-Hunter book that comes out and why I happily re-read the series over and over. Honestly, I’ve never read a Dark-Hunter (or associated series*) story that I haven’t loved. Dragonsworn is no different. 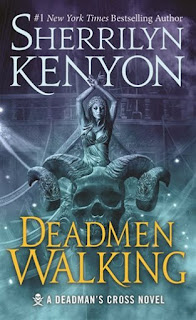 *Kenyon has a number of series that exist within or parallel to her Dark-Hunter world and the stories/series are listed separately on her website, as well as all under the Dark-Hunter banner. These include: Dark-Hunters, Dream-Hunters, Were-Hunters, Lords of Avalon, Hellchasers/Hell-Hunters, and Deadman’s Cross series.

The last (new) book I read during October is also from Sherrilyn Kenyon and is the first book in her Deadman’s Cross series. As also part of the Dark-Hunter world, Deadmen Walking has a couple previously well-known characters and introduces a whole host of new and interesting folks for us to get to know as well. The book actually released back in May (at the time I was a little busy having a baby). I actually pre-ordered and purchased it at release time. Then you know life got a little hectic and I forgot about it. I’m kicking myself for not having read it sooner but boy, oh boy, was it worth the wait! I loved it! The Deadman’s Cross may well become a favorite series of mine all on its own, regardless of its association under Kenyon’s Dark-Hunter banner.

So what did you read this October? Have you been re-reading old favorites? Discovering new loves? Did you dive in to a spooky Halloween themed booklist for the month? Really – what have you been reading?
Posted by LD Ferris at 10:57 AM