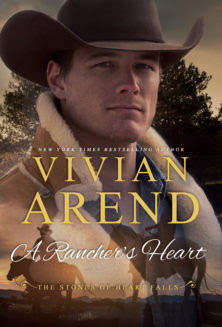 Caleb Stone is wearing too many hats and it’s making him crankier than usual. He’s a cowboy, a father, and the head of his large family—and has been since tragedy claimed his parents over ten years ago. The ranch is struggling, but it’s the title of single dad that’s got him tangled up in knots. He needs a full-time, live-in nanny at the Silver Stone homestead in Heart Falls, Alberta, to help with his two little girls, but the woman about to arrive on his doorstep? Tantalizing, tempting, and trouble with capital T’s.

Tamara Coleman doesn’t regret the choices that led to losing her job, but she definitely needs a fresh start. When a friend recommends her for a nanny position in a new town, she swears this time it’ll be different. No more acting on impulse—except sexy, gruff Caleb is exactly the kind of man who pushes all her buttons. And what’s more, it’s so much fun to push his in return. Sparks fly between Tamara and her gorgeous boss, but she can’t risk her position, and he doesn’t dare risk his heart.

With two people fighting their true natures, something’s going to give. Luckily, there’s more than one way to capture a rancher’s heart.
The Review:

When it comes to Vivian Arend books I’ve come to expect a couple things: main characters who may not realize their own strength but have it spades, interesting characters with depth, personality and heart, and heat. A Rancher’s Heart delivers all that and more. As the first book in a new series we’re being introduced to a whole host of new things – a new “main” setting, a new central cast of characters, and new relative history. Put together that can be a good thing or a bad one. In my opinion, A Rancher’s Heart is all good.

In this opening book of the Heart Falls series those of us who’ve read the books of Arend’s Six Pack Ranch series are lucky in that not every little thing is unknown to us – you don’t have to read those books to understand the story told in A Rancher’s Heart but a little bit of back story never hurts. (Right?) Tamara Coleman, our heroine, is a woman with a heart of gold and a spine of steel; when she thinks something needs to be done or said she does it, damn the consequences. Fortunately for her that steel spine sees her through, even while that compassionate heart may cringe at the results of her actions. After all, if she can stand up to all the craziness of being part of the Coleman brood, she can handle just about anything. Even helping raise two little girls who’ve been hurt in the past.

Caleb Stone is a man who has had little choice in his life but to stand up and bear responsibility. He always acts in what he believes is best for his family’s ranch, his younger siblings, and his two seriously precious daughters. The course of his life, ever since his parents died years earlier, has left very little room for kicking back, for taking it easy, for going with the flow. Or for doing the things that would simply make him happy from day-to-day. Through the years he’s taken kicks – to his pride and his heart – but he musters on the best he can, though without much hope for anything better for himself.

So what happens when two strong, take-charge personalities collide?

From the first moment, there are sparks. Tamara and Caleb are determined to keep things professional though and do their best to ignore the building heat between them. They do a pretty good job of it for a while too by keeping their focus on Caleb’s young daughters.

But, really, how long can they hold out when every day the want grows stronger until it becomes a need? What happens when suddenly your enjoyment of a normal day comes to depend on the presence of another? And how will two people who can normally handle anything life throws at them, handle falling for each other?

I really enjoyed reading Caleb and Tamara’s story. It had moments that made me laugh out loud, sections that made me cry, and pages that held me entranced by the possibilities. Tamara fits in to the Stone family perfectly and is the breath of new life desperately needed, not just by Caleb, but all the Stone siblings. Caleb is the perfect stable foil for Tamara’s frequently spontaneous nature. Together they’re an ideal combination to make for a long, happy, interesting life full of love, laughter, and plenty of heat.

Interested?
Get your copy of A Rancher’s Heart now.
iBooks
Kobo
Nook
Kindle US
Kindle UK