As a bonus, this weekend I’ve got an excerpt from Life’s Defeat to share with you. It’s always difficult for me to choose what slice of the story to share as an excerpt. Especially when a book is as captivating and as fascinating as this one. How much is too much? What is too revealing? What is just revealing enough? I don’t want too give too much away after all, I just want to give you a glimpse of why I’m so entranced.

In the end I settled on two pieces to share. Hopefully neither is too little or too much, and hopefully together you’ll see at least a brief sliver of what I see in this book and in the rest of the series novels as well.

The first time I went up against the man with the cigar personally, it was by mistake.
I remember being young, the tender age of sixteen and newly made a soldier. We had finished a mission, my comrades and I, sabotaging an act of corruption so deep there was a good chance we had saved many people within a village from a devious fate. Drug production and prostitution were averted, women and children free to return home unharmed while the men worked, feverish, in the mines of the hills.
For all that I lacked in experience, I was disciplined and well-trained—I knew I had proven myself well. Still, I was unprepared for the outright menacing act of the madman. As my team prepared to leave, I turned, witnessing the criminal step from a secret door out of the warehouse.
I called out for my teammates, but the words fell on deaf ears as the blades of our helicopter created a small windstorm in the dusty alleyway. Turning back, I stepped toward the man with the cigar’s large black vehicle, seeing him pause before disappearing behind the opened door.
He stared at me, the faintest of smiles tugging at his lips as he removed his cigar. He threw it, smoldering, to the ground, his pocked-face lightening as his eyes pierced into my soul. I didn’t look away, my youth betraying a defiance I thought I needed to express authority.
The gods know I was a fool then.
As he stepped into the oversized SUV, I saw the vehicle dip with the weight of the robust criminal and his accomplices. The doors closed, and still I stared. Then he was there, leaning forward from the front passenger seat, his face again looking at me as his smile became a grin. He gave an order and the vehicle lurched forward.
To this day I am not sure why I didn’t act, why I didn’t run back to the helicopter and request help, why I didn’t at least pull my gun when I first saw the man and shoot him in the brain.
It could have saved so much pain, so much heartache.
Instead, it took me a moment to realize that the man had ordered my execution—the SUV was headed straight for me at a breakneck speed. Two choices flew through my head then, to dive out of the way or to try to take down the men. Stupidly, I chose the latter.
Time seemed to slow as the engine of the black beast roared with its speed. I reached beside me, pulling my gun, and with a flick of the safety began to shoot. The bullets ricocheted off the windshield with appalling speed, their target shifting as I attempted to find a sweet spot in the glass, any vulnerability at all.
There was none.
By the time I figured out the vehicle was impenetrable, it was too close. Despite the speed with which I turned and raced for my own team’s mode of escape, I wasn’t fast enough.
When the vehicle hit, there was a massive shove, sounds of crunching as the front grill imprinted into my back. I spun around as I fell to the ground. The vehicle bounced as I related a speed bump, both sets of tires driving over my arm. I lay there on the ground, my eyes closed as I reminded myself to breathe, the air coming in short gasps from a pain within my lungs.
Bursts of immense irritation emerged then, throbbing stabs of agony from my arm and leg, wetness spreading across my head and limbs. I cried out, tears escaping my already swollen eyelids. I heard the engine slow as the vehicle did, felt a tremor within the loose ground as it skidded sideways to a stop. I shifted, my body protesting with pain as I fought to sit up, my eyes opening to focus on the helicopter. They had noticed me, my captain running in my direction now, yelling something I couldn’t catch.
Rolling over slowly, I forced myself to my uninsured knee, hoisting myself up somehow onto a foot that was shaky at best. I had no choice—I couldn’t stay in the street, and I feared the vehicle would come back if I lay there long enough. My only choice was to get back to the helicopter, no matter how.
I glanced at the SUV, my neck mobile enough for slight movement, and caught the eye of the man with the cigar. His face peered out the window with a look of contemplation. He nodded once as I straightened my back, my spine blossoming in a pain I barely knew possible. The window rolled up as the vehicle took off once more. This time, it drove away.
~ Life’s Defeat, page 8-11, First Printing, 2015 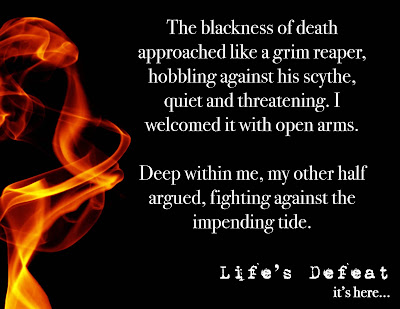 As soldier of the cause, we fought hand to hand, aimed our guns and pulled the triggers with immediate discretion, and used our youth to deceive and betray those who we knew lived to the detriment of others. They were criminals, all of them, slavers and drug dealers, killers and narcotic producers. Their work was to put mankind into a slump of despair and dependence.
Ours was to take them down.
And once in the school’s secretive military faction for some time, what I learned StPatrick had told me tong ago was a brotherhood, I learned a truth about myself. I was very good at what I did. Too good.
It was both thrilling and terrifying.
~ Life’s Defeat, page 23, First Printing, 2015

I hope these little pieces of the story I’ve shared, these early looks at the thoughts and actions of the main character, as well as a small glimpse of the depravity of the “man with the cigar” to come, has intrigued you. I hope it’s been enough to make you consider getting the book and reading the first part of the story of The Life’s series. Because truthfully - it is so worth it.

If you’ve missed my reviews of Life’s Defeat you can see the original 2015 review here, and my new review of it here.

And if you’ve yet to enter to win one of the three great prizes in this month’s FAOM Giveaway, do it now - a copy of Life’s Defeat is just one of the amazing things you could claim on February 28th!

I hope you’ve been enjoying your weekend and I leave you now to enjoy the rest of it!