Things Get Dicey on a CLOSED SET - REVIEW 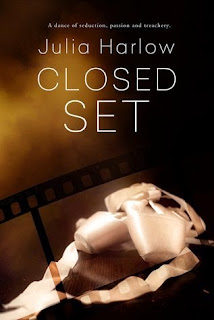 Synopsis
Cassandra Carlson is working on her five-year plan. A professional dancer, she moved to Los Angeles after college to work at her best friend’s Hollywood dance studio. She decides she can put up with the glitterati for the time being until she saves enough to open her own studio back home in Cincinnati.

When soon-to-be A-list British actor, Christopher Edwards, comes to her for dance lessons for his new film, the attraction is instantaneous and intense. Both are young, available and beautiful, but while she finds Hollywood garish and superficial, he’s on the brink of realizing his life’s ambition with no inclination for a serious relationship. Or so he thinks.

Just when their white-hot desire can no longer be denied, a jealous actress targets Cassandra in an insidious scheme, and a powerful studio head poses a formidable threat to them both. Cassandra puts herself in jeopardy in order to protect Christopher, but will she lose him in the process?
REVIEW
As a dancer I was really looking forward to this book after first hearing about it and I did enjoy the story for the most part. I liked Christopher's British charm and his desire to keep Cassandra safe in a sometimes hostile environment. I enjoyed Cassandra's passion and drive to excel, as well as her ever increasing love for Chris. I liked many of the characters, while others I found redundant to the plot and/or storyline, or lacking in distinct personality though they were supposed to be significant to the story.  I think Closed Set had its pros and cons but in the end I did like it.

Pro: Dance instructor to the stars meets an actor who helps her get the big break she didn't even know she'd been looking for.

Pro: Budding and building chemistry between Cassie and Chris. It's not just a straight shot to happiness for the lead couple.  I greatly enjoyed the fact that they had to struggle to find their HEA.

Con: While I enjoyed seeing the changing environment of Chris and Cassie's relationship, their situational reactions became overblown and predictable. One couldn't just be slightly unsure of the security of the relationship, they must be insanely jealous, or make rash, sweeping and unrealistic assumptions about the others motivation.

Con: I enjoy a bad guy as much as the next girl. I can even accept sexual assault as a good villainous tool, the vehicle you could say by which the villain is the bad guy. While using this once against the heroine and the couple is acceptable to me in a story, multiple uses by multiple villains is simply overusing the tool and creating redundancy.

Pro: When bad shit happens, Chris is supportive of Cassie and does and says all the right things, at (more or less) the right time.

Con: Chris has a tendency to overreact to innocent situations, and thus creates these big crisis' for the couple.

Con: Cassie preaches the need for complete trust in their relationship, but then turns around and exhibits little.

Pro: The couple does get a happy ending.

Con: The ending of the story and the HEA seemed a little rushed after everything else that happened.

I liked it. I enjoyed it. But at the same time I don't know that I would read it again.
Posted by LD Ferris at 7:00 PM