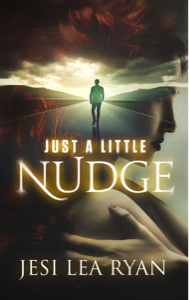 Synopsis
“Fast moving, spicy fun in this paranormal with a romantic twist peopled with likable and interesting characters. Where’s the next one?”  Toby Neal, author of the Lei Crime Series

“Absolutely captivating follow up to Ryan’s Arcadia Series. Filled with emotion, steam, and danger, these characters step off the sidelines and take command of their own story.” – DelSheree Gladden, author of The Aerling Series

Marley Sexton never aspired to be a stripper. She even chose the stage name Misty Showers as a joke, thinking she’d make a few quick bucks and move on to greener pastures. Three years later, Marley’s still stripping. It’s the only job she can land that will put a dent in her mother’s mounting medical bills.

It’s also the only job where she feels justified parting fools from their money with a little talent she calls nudging.

As psychic powers go, nudging isn’t impressive. Marley can’t get people to do anything they’re not already inclined to do. Useful for making a seedy customer grab a larger bill from his wallet, but not strong enough to ditch a drug cartel that’s on her tail.

Marley is in over her head. She’s not big on trusting people, especially a strange man with a gun, a badge, and a story that doesn’t quite add up. JC Moreno figures out that Marley may have taken the nudge a little too far. But how? Whoever the guy actually works for, one thing’s for certain. He has a history with the cartel and an agenda of his own. Although the suspicion between Marley and JC runs both ways, maybe they can work together to both get what they want…if they don’t get killed in the process.

**** Recommended for ages 17+. Contains naughty things like f-bombs, violence and sex. ****
REVIEW
When you've got the ability to convince others to do nearly anything you want, what exactly would you try to get away with? All Marley does is "nudge" men who are already opening their wallets during her act, to open and dig in to them a little deeper. They become far more generous then they originally planned to be.
It's not the life she'd hoped for. Nor the one that she'd planned for herself. But it's the one she's got and she'll do what she has to to survive.
JC started life rough and with the love of his family turned it around. Now he's a psy agent for the CIA working off the books to help a friend and tie up loose ends. When a dead man tells JC that Marley killed him, JC hones in on her as either a target or a victim.
But as the Mexican drug cartel, who is already gunning for JC, sets its sights for Marley too, the heat turns up on them both. JC's CIA handler becomes interested in Marley's talent and life for all of the becomes very interesting.
I liked this story.  Simply put, simply true. I had no idea what to expect but in the end I was extremely happy with the way the story unfolded and with the development of Marley and JC's relationship. I wonder if we'll see more of this dynamic duo in the future?
Posted by LD Ferris at 5:50 PM