FAOM: I'm Giving 'Fighting for a Chance' a Chance Today

I’ve highlighted all of the books in The Chasing series… except this one, the last one. Fighting for a Chance is currently the final book in the series and features a character we met all the way back in the beginning in Chasing Rainbows. In that book, I was left with something of a bad taste in my mouth for Chance and his brother Chase. I am busily working my way through this series and I’m nervously looking forward to this final book.

Will I like the man Chance has become, or will I still have issues with him? Will I find myself rooting for him and Ivy, or quietly hoping that he gets a taste of his own medicine?

If you’ve already read Fighting for a Chance tell me what you thought of it? Should I give him a chance?

Fighting for a Chance
by Linda Oaks 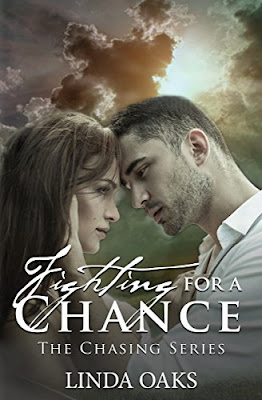 It all began with a secret.

A cross of paths that altered a life.

Iris Malone had a plan of revenge. She searched for the man known as “The Savage.”

Chance Logan was one of the most promising heavyweight contenders on the planet. Her plan was simple, to make a savage fall to his knees. She would break his heart like he’d broken so many countless others before her.

But sometimes even the best-laid plans can begin to unravel.

What happens when you fall for the enemy?

When you’re in danger of losing your heart to the man you promised to make suffer?

When lines are crossed, and it’s too late to turn back, you have no choice but to live with the decisions you make.

Will Iris’s plan for revenge ruin the chance at a love of a lifetime? Will she fight for a chance to love a savage or will she lose everything when the truth is finally revealed?

Someone was going down.

Do you care to place your bets as to who will be standing at the end of the final round?