FAOM: My REVIEW of The Way Home by Linda Oaks

The Way Home
The Chasing series, book 3
by Linda Oaks 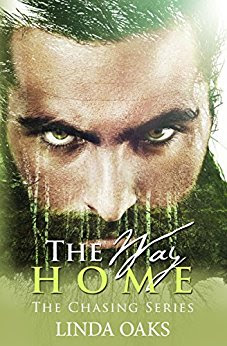 “Not everyone you love is going to leave you…but what if they do?"

For Nate Lucas, this was his reality.

When he lost her, he was left with no choice. Life was impossible in Crawley without her. He couldn’t live with all of the memories or her ghost.

He vowed to never return again.

It was business that brought him back and the chance to right a wrong, but then she needed him; his best friend’s little sister. Her life and her child’s were in danger. It was an arrangement until it became more.

He vowed to never love again; to never allow the past a chance to repeat itself, but sometimes you’re left with no choice.

When the walls around your heart are finally breached, do you run and save yourself or stay and fight for the chance to love again?

When you lose your way, how do you find the way home?

Nate Lucas lost the love of his young life when he was 18 years-old. We know this story, we’ve read (in Chasing Rainbows) how deeply that death affected the other people who loved her – Natalie Hayes. But for Nate, the pain wasn’t simply about her death; for him, the body blow came from more than just losing her, with her he’d lost his future. Or at least the future he’d seen for himself, for them, the only future he believed he could have. To survive, to go on, he had to leave. He had to keep himself separate, wall himself off and stay away.

But alone is no way to live, and living the way he did through all the years since her death was merely existing. To heal, to really live again would take more.


Despite her more affluent background, Miley Triton’s life had not been some beautiful bed of roses. The thing about roses after all, is that they have thorns. For Miley those thorns came in a number of shapes and sizes. Together they shaped her life, changed its course and colored her view of everything around her. Not to mention the way it altered her view of herself.

Alone, except for her young daughter, was how she’d come to like life. Well liking it was probably pushing the definition of the word, but to Miley if you were alone, you may be lonely sometimes, but you wouldn’t be hurt by others.

When I first started reading The Way Home I realized that to a certain degree we (the readers) knew Nate’s back story. Or if we didn’t know it we could understand it to a point. The more I read, the more back story I discovered – not just Nate’s loss of Natalie but of everything that he’d lost as a youth – the more his damage, for lack of a better word, became apparent. I think it’s safe to say that at one I point I actually wondered whether there would or could be redemption for him. Whether he would ever be willing to take hold of something more for himself: something that would make him want to really live again.

In a very big way that’s what The Way Home is about – that finding something that makes you want to truly live again when you’ve determined or resigned yourself to being alone. “Home is where the heart is”, that’s what they say, right? But home isn’t just a house, it’s people too. It’s community. It’s caring.

Some people need the big picture to really see it, others just need one facet, one heart, to know it’s there.

For a lot of reasons, I connected with this story on a deeply personal level. Watching Nate and Miley struggle to find stable footing with one another, while at the same time allowing themselves to re-evaluate their views of themselves and the course they wanted their lives to take, it hit very close to my heart. I can’t deny that there were a few times I wanted to curse Nate for his bullish, blatant assholery (and I don’t care whether that’s a real word or not!). On the flipside, there were a couple times I wanted to shake Miley for her own snapshot, retaliatory behavior.  Despite those moments though, I found myself rooting for them. Not even that they would end up together but that, together or apart, they would end up better off then they began. And… well, they did. Which for me, was actually the perfect course forward for their lives.

I truly loved The Way Home. I had no idea when I started how the story would touch me, personally, or how important the resolution would be to me. Yet I know that even without those factors, the personal correlations I mean, I still would love the story: the characters’ struggles through personal hells, the connection and feeling that grows between them, the gathering faith and strength that they bring to one another… But for the painful course their lives had already taken, Nate and Miley would never have come together as they did in The Way Home, there would have been no need. Isn’t it strange and somehow wonderful that even amidst the darkest parts of life, one single point of light can lead you home?

Are you intrigued? Interested?
Get a copy of The Way Home today and discover whether Nate and Miley’s story will touch your heart as it has touched mine.