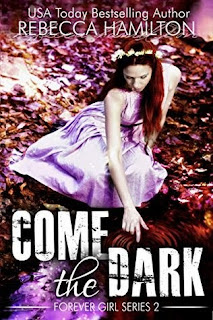 TRIGGER WARNING: This book deals with the sensitive subject of sexual abuse.

Rose desperately wants to escape the abuse of the father who impregnated her and the dark spirits that haunt her life. Being thrust from Georgia 1961 into the era of Salem’s infamous witch trials isn’t what she had in mind, and now her daughter is left hopelessly out of reach.

The only way to return to her daughter is by facing certain death to banish the dark spirits that plague Salem. If she doesn’t eliminate these dark spirits in time, they will destroy civilization and trap her in this strange new place, ages away from her daughter.

Even if she can complete the task in time to return home to save her daughter, there’s still one problem: she’s falling in love with a man who can’t return with her. Achieving her goals will force her to choose between the only man who has never betrayed her and a daughter she can’t quite remember but will never forget.

A heart-wrenching tale of a mother’s love for her daughter, this romantic paranormal fantasy underlines the depravity of both historical and modern society while capturing the essence of sacrifice and devotion.


For years I’ve read stories of fantasy and magic.  I’ve devoured romance and mystery.  I’ve cried as favorite characters have died, and cheered when the villains get their comeuppance.  I’ve fallen in love with the underdog and been surprised by the twists a story may take.  I love history and the today, and all the possibilities the future can hold.  It is always a nice surprise when an author is able to meld all of these things together into a story.  Such, it was my pleasure to discover, is the case of Rebecca Hamilton’s Come, the Dark.


While Come, the Dark is the second story in the Forever Girl series, I read this book without the background of the first FG’s story.  I was able to understand and follow the story, beside a small amount of disorientation (similar to the heroines) with the timeline and a point of confusion that I will address shortly.  This isn’t a time-travellers story in the strictest sense of the word but it does hold some of the elements you might find there and at some points this too does result in a bit of confusion.  As I said, I was able to follow the story and it can certainly be read and enjoyed on its own, however I do wonder whether some of Come, the Dark’s storyline would have been easier to understand and less confusing to follow had I previously read the first FG’s story.


The biggest source of confusion, at least that I experienced, was from the use of multiple names for the main character.  She begins the story in 1961 as Rose.  Suddenly she becomes Abigail of 1691, except that to her she is still Rose.  She thinks of herself as Rose and has little to no memory of being Abigail.  Only, she then discovers that she is really Cordovae and that Abigail and Rose come from Cordovae, so Cordovae was able to become them.  Additionally, the longer she remains in the 1691 timeline, the less she is able to remember of her 1961-self.  With explanation from other characters it becomes more understandable, even acceptable within the realm and basis of the storyline and genre.  Except the other characters never really settle on one name to call her, and even she introduces herself differently throughout the story.


In the end, besides or maybe despite any name-confusion Come, the Dark was a really great story.  I thoroughly enjoyed the combination of mystical and physical forces, as well as the integration of history and fiction.  I was charmed by William and his willing devotion to Rose/Abigail/Cordovae (and yes, they actually refer to her like that sometimes in the story). Tess was a nice combination of abrasive and caring, and boy-oh-boy does that make sense now.  Other characters that we met and whom interacted with the intrepid trio of Rose, William and Tess, added color and provided some of the necessary grit to help root the story into the 1691 timeline.


All in all, I definitely recommend the book.  Except, I would probably suggest that book one of the series The Forever Girl should be read first.  I intend to read book one and then re-read Come, the Dark, and hopefully I’ll discover that some of the questions that I had (primarily before any attempt was made by the characters to in any way explain them) will be answered.  However I will say this: if you’re a fan of stories with twists, stories steeped in history and brimming with magical elements – Come, the Dark should definitely make it on to your TBR pile!
~~~~~~~~~~~~~~~~~~~~~~~~~~~~


For more information about the book, author, series and more >> Goodreads