Feel the Pull in The Siren's Realm - REVIEW

The Siren’s Realm by Megan O’Russell
(The Tethering, #2) 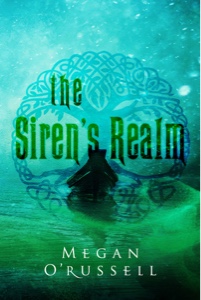 Jacob loves Emilia Gray, but things aren’t always that simple in the world of Magickind…

The war has begun.

The Dragons are gaining power, and the Gray Clan stands alone. Desperate to find a way to stop the Pendragon, Emilia is forced to seek answers from someone who hasn’t been seen in seventeen years . . . Her mother. Embarking on a magical journey filled with witches, wizards, centaurs and a dangerous and powerful Siren, Jacob and Emilia must take a leap of faith to a land neither could have ever imagined . . . and hope they can then find their way home.

Goodreads: https://www.goodreads.com/book/show/23445448-the-siren-s-realm?ac=1
THE REVIEW
They were only children when they found each other but even then they were inseparable. When Emilia is injured during a childhood accident and then heals before Jacob's very eyes, she's forced by magic-kind law to leave him, though she promises him that someday she'll return and leaves with him one of her most prized possessions.
She keeps her promise to him. Years later she returns and introduces him to a world, and a war that he never knew existed.
For Jacob, Emilia was all that mattered and he would do anything to prove himself worthy of her. He would do anything to protect her, to keep her safe. Nothing would stop him from saving her when she's kidnapped by the rebels of the magic world. Yet in saving her, he's also inadvertently tied them together in a bond that only death can sever.
[The above is a brief summarization of book 1 of the series THE TETHERING.]
What was once a magical life suddenly becomes a dark dream and Emilia and Jacob have to face some hard truths. They have to make choices that affect not just themselves but other members of their family and their household.  And they must accept the changes of their world.
For me, the bond between them was obvious right from their first meeting in Tethering. It was a natural affection and love for one another, one that through their tethering is only amplified. Jacob has always loved her, even while she was with Dexter, and throughout THE SIREN'S REALM he struggles with the knowledge that though indivisibly bound, Emilia doesn't feel the same way for him. He can't leave her and wouldn't even if he could. It is, however, delightful to watch and see as this second story in the series develops and Emilia begins to see the truth in her own heart.
I loved watching these two teens struggle with their emotions, while also struggling with the weight of responsibility they both feel for the other members of their household and family. For all of man- and magic-kind, actually. They make some poor decisions along the way and perhaps they don't always fully think through the consequences of the actions they take, but being who they are, and bound as they are, they do the only thing they truly believe they can.
In the end what they did may save them, or it may just hasten their ruin.
I definitely recommend THE SIREN'S REALM as the next story you read. I do however recommend that you read book 1 of the series THE TETHERING first. For one: the story in SIREN'S REALM picks up almost directly from the end of THE TETHERING. And for two: a good majority of the backstory (found in TETHERING) is necessary in order to understand and follow the story in SIREN'S REALM. Characters casually mentioned, yet vastly important in book 2 are only ever introduced, described, and discussed in book 1. Emilia's history is practically the basis of the story line in the second book and is introduced and first explained in book 1.
Bottom line, read both books. You won't be disappointed and furthermore, you'll love every minute of your reading time
Purchase:
Amazon: http://www.amazon.com/Sirens-Realm-Tethering-Book-ebook/dp/B00V8RYJKQ/ref=sr_1_2?ie=UTF8&qid=1432150189&sr=8-2&keywords=Megan+O%27Russell+tethering
B&N: http://www.barnesandnoble.com/w/the-sirens-realm-megan-orussell/1121821248?ean=2940151498821

Great review, hun! This sounds like a very poignant read and well written, too! Glad you liked it! :)

Thanks @Giselle! It's a great book!