And we're back with the 2nd question from the mini-interview with THE HEARTBEAT THIEF Author AJ Krafton.
Again, enjoy!
Where did the characters get their names?
One character was named by a fan on Facebook, one name was inspired by a song, and one simply named himself.
Felicity Keating is a close friend of the main character, and was named in an impromptu contest I held on Facebook. I had a name for her but I felt like doing something spur-of-the-moment. I loved the suggestion of Felicity because it was so fitting for the character and what she symbolized. (The Facebook Friend who suggested the name is mentioned in the Acknowledgements section of the book.) 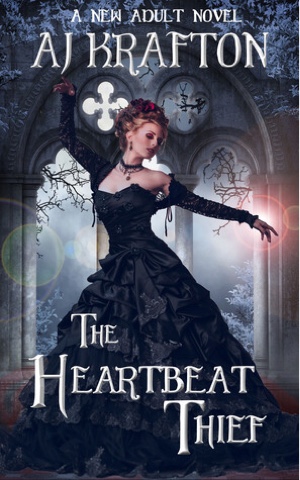 The main character is Miss Constance Fyne, who prefers her nickname “Senza”. Her given name, Constance, alludes to the word “constant”. The suffix con- means with.
Senza is Italian for “without”.
Her last name Fyne is a play on fine, or fin: French for end.
Senza Fyne is a play on the Italian word senzafine, which means “endless”. Fitting name for a girl who seeks the secret to eternal youth.
I love the word senzafine. I learned it when I heard the Italian metal band Lacuna Coil sing their song of the same name. It’s my absolutely favorite LC song.
One line of the song, when translated into English, fits Senza perfectly: I’m standing still in this moment of pure madness…I don’t know if I wish for good or evil although perhaps sin will give me more…
Playing opposite to Senza is a tall, mysterious stranger who teases her with secretive smiles and suggestions of magic. From their first meeting, he calls her bien-aime, which is French for “beloved”. When she demands his name, he listens to the tolling of a nearby church bell before calling himself Mr. Knell.
But he has an older name. A much older name. And it will take Senza a very, very long time before she realizes just who he truly is.
The song “Senzafine” fits him, too. One particular verse fits Senza’s dark seducer perfectly. There is no life without me. There is no choice without me.
And Senza utterly believes him.
We'll be back in a while with another question and answer from the author!!