EXCERPT & GIVEAWAY for 'Better When it Hurts'

It's the desire you've never voiced.

Because you wonder if it really is.... BETTER WHEN IT HURTS.

Feel the tease, in another excerpt from Skye Warren. 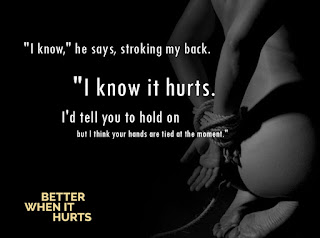 
The whistle of a belt coming off follows me into Blue’s bedroom. My breath stutters in my chest. I hear the threat of the movement, the speed and power behind it. It’s more than a man getting undressed.


There’s a hundred ways a belt can be used to hurt me. I know them well.


I turn my head to the side, addressing him but showing deference too. It’s an instinct now. It’s survival. “What are you going to do with that?”


“I’d rather show you,” he says, approaching me, prowling around me.


He doesn’t wait. One hand takes my wrist. Standing behind me, he leans close. “What do you think I’ll do with this? Make your pretty skin all red? Make you cry?”


“I’m going to do both of those things before we’re done here, Lola.” He pauses, loosening his grip slightly. “But I’m not going to whip you with this.”


There’s only a second where I can feel relieved before I feel him drawing my other hand behind me. It’s a mistake to relax around him. Whatever I’m thinking, he’s doing something different. However much I brace myself, it’s still going to hurt.


He wraps the soft leather around my wrists, binding them together behind my back. It pushes my breasts out in front of me. Cool air brushes over my skin, tightening my nipples.


There’s weakness in this pose, being held, being open.


And there’s strength too, the pride of being wanted, the power of desire.


“On your knees,” he says so softly I almost don’t hear him.


I don’t know what he’s thinking. Whether he sees me as an object he can use or as an enemy he can conquer. I’m a little off balance, lilting to the side as I sink to the carpet. His hands cup my arms, helping me down, guiding my gently. It feels more like worship than anger, more like kindness than cruelty.


At least until the sharp sound of his zipper rips through the air.


I shiver at the foreboding underneath the words. “Yes.”


I have seen his cock before, but only in the dark, holding it in my fist while I jerked him off, shadows and motion. Now I see the skin like the dark side of a peach, almost the color of a bruise. I see the curve of a vein underneath. I see the head of his cock, fat and proud and already glistening at the tip.


I see everything clearly because the saturated late-afternoon light still streams through his window. Our hours are all backward and twisted. Where another woman would do this at midnight, would expose her shame to the moon, mine comes open at five o’clock.


“She thinks you’re safe with me because I protect the other girls.” He approaches me, his cock near my face, his eyes looking down on me. “I even protect you.”


I choke out the words. “Because only you get to touch me.”


He nods approvingly. Candy doesn’t understand, he means. I understand. He’s showing me that we’re together on this, like some perverted joint mission where I agree to be hurt. And haven’t I? I showed up here of my own free will. Maybe I do want what’s coming to me.


a Rafflecopter giveaway
Posted by LD Ferris at 6:00 PM