REVIEW - Get Your Fill of MEN AND MARTINIS

Synopsis:
It’s 1998…and New York City just might not be prepared for the Girlfriends of Gotham… 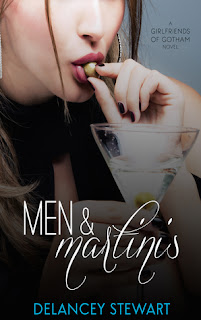 Natalie Pepper knows almost nothing about New York City, except that it’s far, far away from her home in California. When she packs up everything she owns and moves there on a whim, luck is on her side. She stumbles into a promising marketing job in the developing Internet industry and finds herself surrounded by poised and polished men who are nothing like the guys she knew back home.

One man stands out from the rest… CJ: All-American hunk and genuine good guy. But they work together, and giving in to their mutual attraction could put Natalie’s sparkly new world at risk. She resolves to look, but not to touch…if she can ignore the feeling that he’s the guy she’s been looking for her whole life.

Natalie’s new friend Candace Kanie has no such concerns. From the barroom to the boardroom, she’s used to getting exactly what she wants, and her no-crap attitude ensures nothing gets in her way. But when she meets Damon, the notorious playboy at Natalie’s company, she finds that her take-no-prisoners style might not be as effective in the romantic realm.

Frustrated and often irrational, Candace pushes for what she wants until something’s gotta give. And when it does, she realizes that the one thing she might not do better than anyone else is change.

The first book about the loves, lives, and laughter of a group of friends finding their way in the city is a laugh-out-loud romantic comedy full of Men and Martinis!
Goodreads            Purchase @ Amazon

REVIEW
Natalie Pepper is a California girl that makes the move to New York City hoping that it’s just the change she needs in her life to prove herself and to her father, that she can succeed on her own. She lucks out and right away lands a great job but it’s one that she’s in no way qualified for.  It’s at work that she meets CJ – a great looking guy that does all the right things for her and expresses his interest in her as well.  Except she’s made a rule for herself and she’s determined to stick to it: she will not date anyone she works with.
Candace Kanie is from New York. She knows the city and she knows exactly what she wants from it. And nothing is going to stop her from getting exactly what she wants – not the job, not the guy, not the life.  Except... Her job doesn’t just hinge on her determination; a guy doesn’t actually become a boyfriend if he doesn’t want to be a boyfriend, and life, while life is simply more complicated, and nowhere near as 2-dimensional as she’s perceived it.
Fortune lands them at a party together and through sheer luck they become friends.
Then there’s Maggie and Lulu – friends of Candace’s from college, who also quickly become Natalie’s friends too.  There’s Damon, Natalie’s co-worker.  Sam, the one-night stand turned sort-of boyfriend. Catalina, Maggie’s roommate and friend.  Gregoire, the French investor, and so many more people that make up the fun ‘cast’ of characters in this book.
Before reading the book I was imagining it would be something like Sex and the City and in many ways, I wasn’t wrong.  You can definitely see the parallels between them though these four ladies (Natalie, Candace, Maggie and Lulu) go about their lives in New York City somewhat differently.  I guess I wasn’t really sure whether I’d like the book, I was never really a Sex and the City fan (though I’d kill for some of Sarah Jessica Parker’s shoes) but I did.  I liked it a lot, which still sort of surprises me.
As with many books, there are things about Men and Martinis that I didn’t like.  For example, a character here or there that I couldn’t really accept or a plot-thread that (still) doesn’t make sense.  More than once I found myself irritated by a character in one chapter, only to feel sort of sorry for them in another.  Now, normally I would accept that as the normal consequence of characters developing their personalities, or the dichotomy of well developed, if unbalanced, characters – but this wasn’t that, I don’t think.  Or maybe I just haven’t seen the actual “end” of the development of the character, as if there’s more to them that just what we’ve seen so far.  Which I admit is entirely possible.  With the sneak peek at the second book in the series Highballs in the Hamptons I think that could be a possibility but I guess at this point only time will tell.
Do I recommend this book? Absolutely! It’s a fun read, and I did truly enjoy watching as the craziness of these girls lives unfold.  Now that I’ve finished drowning myself in Men and Martinis I may just have to make some time to see what happens next when we’re served Highballs in the Hamptons.
a Rafflecopter giveaway
Posted by LD Ferris at 7:00 AM

I'm a huge Sex ad the City fan so anything that is remotely like that is right up my alley! This sounds like a really entertaining read! Great review! :)

Thanks so much for hosting me, and for your review!

I was honestly pleasantly surprised by how much I actually did like the book! Now I've got to track down Highballs for my TBR pile. Thanks @Giselle and it was my pleasure @Delancey