Find Yourself Again in DISCOVERING APRIL 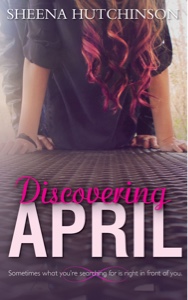 Synopsis:
April Landau thinks she has everything she’s ever wanted. Her high school sweetheart, a house she can’t afford, her bipolar tabby cat, and she’s all set to begin her Junior year of college. Just when she least expects it, her life gets thrown for a loop. When things between her and her long time boyfriend unravel, she becomes stuck in a downward spiral of emotion. Finally, opening her eyes to the fact that she may have given up more than she ever could have imagined in this relationship. She finds herself struggling to keep her head above water.
Enter April’s next door neighbor— Jared Hoffman. He’s her complete opposite. A high school drop out who was forced to take over his parent’s business after their untimely death. It’s no surprise this tragedy affected him greatly, causing him to recede almost completely from society.
But he has one secret. A secret he’s been carrying around for years.
What happens when their worlds collide? Can an old friendship be the one thing that brings these two back to life?

A new adult love story filled with drama, sex, death, and the complications of all of the above. 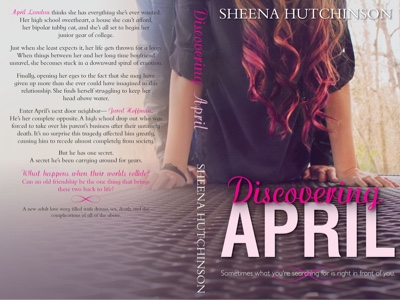 April and Jared have lived next door to one another since they were just kids. As children they were the best of friends. In high school they started to drift apart and then Jared's parents were killed in a car accident and he withdrew from everyone around him.  Years later they are still neighbours, though they haven't truly been friends since the accident.

When April's boyfriend breaks up with her she struggles to find her footing and remember who she really is, when she's not just his girlfriend. She surprised, shocked and dismayed to realize that she hasn't recently considered who she was or what she wanted to do with her life.

Jared sees her struggling to move past her lost relationship and decides to help her remember the way she used to be, so that she could remember the girl she was, once upon a time.

I really did enjoy watching the way that April and Jared both evolved through the story. I liked seeing the way they grew up, while also remembering to embrace their inner child and have fun once in a while. And I really loved to watch them fall in love with each other too.

I have to admit that I struggled with reading this book through the first quarter of it. At times it was if the writing was done by a child - the wording, syntax and even the watery plot seemed immature. Then it changed. Almost in time with the evolution of the characters the writing improved. Or it seemed to me it did anyways. There were a couple moments here and there where I'd get that immature feeling again but then I'd turn a page and it was good again. Maybe it was just me, maybe it's a failing of the editing.

Either way, in the end DISCOVERING APRIL by Sheena Hutchinson is a very sweet story that I enjoyed reading and am happy to recommend to others.
Posted by LD Ferris at 8:00 AM