Earlier this week I told you guys my guilty secret about this month's FAOM A.M. Johnson's work - that I haven't read any of her work yet - and I asked for advice about which of her books to read first: Sacred Hart, a stand alone novel, or Possession, the first in the Avenues Ink series. Well your suggestions and votes poured in through social media and the results were about even. In the end I took the suggestion made by several Instagram peeps who told me that both books were simply amazing so I should read Sacred Hart first and then Posession... because when I finished Possession I would definitely want to keep going and pour through the other books in the Avenues Ink series. 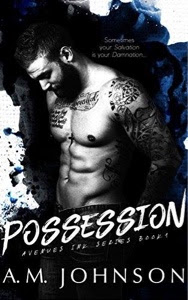 So that's the route I'm taking. I started reading Wednesday night and I have to say, so far so good. I've already cried once (in public LOL) which I'm told is just the beginning, and I'm already in love.

But the love, because there was a lot of love coming in for Possession got me thinking and wondering more about the rest of the Avenues Ink series. About the books, about the men and women featured in them, and about the stories that comprise the series which resulted in the fan following and devotion I discovered when I asked for reading suggestions. So, Avenues Ink.

I already posted about book 1, Possession so I'm not going to repeat myself, however I am going to insert the cover here again. For one - because the model is hawt (LOL), and for two because I can't get over the gorgeous covers for this series and feel like you simply can't see them too many times. 😍😍😍

I don't want anyone to feel left out or left behind, so if you need to grab a copy of Possession still you can get your copy here. 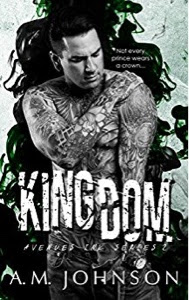 Kelly Kavanagh was Liam’s happily ever after, his loyal princess. A lifeline to something better than any high school dropout could ever hope for…until the day she left to pursue a dream that didn’t include him and slowly his kingdom crumbled to the ground.

Liam O’Connell was the sun to Kelly’s everlasting moon, her painted prince. A strong and devoted soul to fight the war she was slowly losing against herself…until his promises had become lies and her dream was the only way she would ever survive.

They have more than just miles and time between them now. The twin fortresses they’ve built around their hearts are next to impossible to scale. But, when two parallel fates collide in life and in death, will the impact be powerful enough to break down their self-imposed walls?

Every love story starts with Once Upon a Time, but in real life there are no fairytale endings, and the prince who rescues you...will never wear a crown.

Oh boy, are all of these books going to make me cry??
And make me fall in love with another O'Connell brother???
Fall in love with Kingdom with me. Get your copy here today. 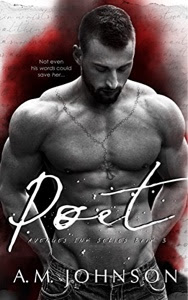 Melissa Trujillo knows suffering. She's tasted it, touched it, injected it. Sobriety is a gift, but it isn't enough to wash away her secrets.

Kieran O’Connell knows sacrifice. He's owned it, held it between his fingers, and felt it in his knees. Words are his freedom, and they've begun to fade.

Two different worlds, one moment and the Earth shifts—granting them a path.
His eyes meet hers. Her hand fits his.

But, when sin meets virtue, angels fall, and the truth, it becomes a blade. Together they’ll walk the sharp edge, and if her lies cut too deep, not even his words could save her… save them.

Like the stories of his brothers, Kiernan's sounds like a must-have to me.
Get your copy of Poet here.

If these books are new to you and you're anything like me, you suddenly have several new titles on your TBR (to-be-read) piles or your wish lists - thank goodness it's Christmas in a couple weeks and you just may be getting a gift card you can use to buy more books! And if you're one of the many fans of A.M. Johnson that has already read and fallen madly in love with the O'Connell brothers (and the women who claim them, and their stories) you may all of a sudden be clamoring to do a re-read of the books. Which ever side of the reading spectrum you fall to, I hope you'll check out the books and happily bliss out with these fantastic stories.

OH! And if you haven't yet done it - and why, I ask haven't you? - make sure you take a minute or two and enter this month's giveaway. After all wouldn't you LOVE to get your hands on a signed paperback of any one of Amanda's books??? For real... Enter here!