Love Strikes in ONCE IN A BLUE MOON

Once in a Blue Moon by Amie Stuart 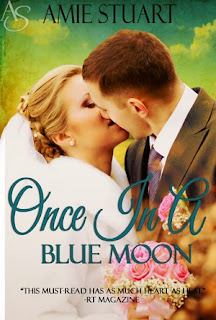 At eighteen, Ty Boudreaux married his high school sweetheart and planned to live happily ever after on the family ranch. But after twelve years in a volatile, one-sided marriage, this gentle cowboy is struggling to put his life back together.

At eighteen, Bettina Blanchard’s goal in life had been to shake the dust of Bluebonnet, Texas off her heels, and with her baby sister now safely in college, that dream is within her grasp. But underneath Bad Betti’s tough exterior beats the heart of a woman with hopes and dreams, and she’s loved Ty almost as long as he loved his ex-wife.

When fate drops Ty in her lap, one night of passion leaves them dealing with a pregnancy and a marriage both have reservations about. Can a girl from the wrong side of the tracks and Bluebonnet’s favorite son find common ground outside the bedroom? Despite the interfering in-laws, a jealous baby sister and a holiday no one wants to remember, Betti and Ty discover that even though their happily ever after doesn’t come easy, anything worth having is worth working for.
Goodreads: https://www.goodreads.com/book/show/25395805-once-in-a-blue-moon
Purchase:
Amazon: http://www.amazon.com/ONCE-BLUE-MOON-BLUEBONNET-TEXAS-ebook/dp/B00WNSW5N2/ref=sr_1_1?ie=UTF8&qid=1431632476&sr=8-1&keywords=Once+in+a+Blue+Moon+amie 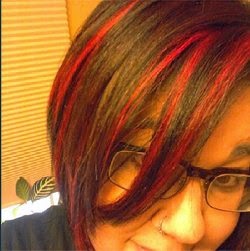 Amie Stuart is the last of a dying breed, a native Texan, and still makes her home there, where cowboys and music (her other two loves) abound. Growing up, she wanted to be a lawyer and a psychologist. No doubt the shrinks would have a field day with her head, but she's seen the error of her ways and considers all those other jobs 'research' for the writing gig.

She's a multiple contest finalist as well as a trained contest judge and is affectionately know as The Terminator by her critique partners. She's written as CELIA STUART for Black Lace Books, & Liquid Silver Books, and as AMIE STUART for Kensington Aphrodisia, she has a short story (PEACHES 'N CREAM) in Zane's CARMEL FLAVA 2, and launched Cobblestone Press's short erotica line,Wicked in 2007.
Posted by LD Ferris at 6:19 AM